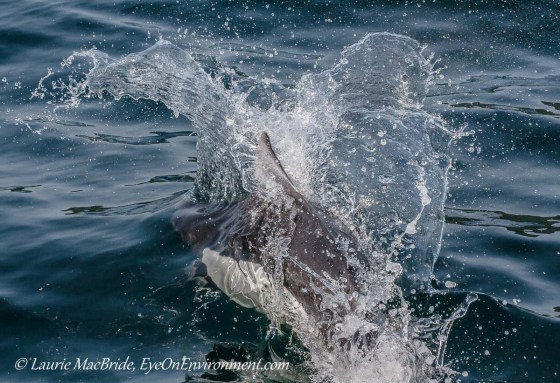 Dall’s porpoises are deep-water cetaceans, but every now and then we get a chance to see them up close. They travel in small groups at speeds up to 30 knots, and are known as “splash dolphins” for a good reason: they make an impressive rooster tail as they rush through the water. Groups of Dall’s porpoises often “bowride” (criss-cross rapidly right in front of a moving boat). Standing on the foredeck while this is happening is thrilling, to say the least!

Although Dall’s porpoises can be found in the Strait of Georgia, where I live, I shot this photo in Wright Sound on British Columbia’s North Coast. It’s a place where six long arms of water meet – including the channels that make up the Inside Passage and the routes to and from Douglas Channel (the fjord that leads to Kitimat). It’s right about the area where the large BC ferry, Queen of the North, ran aground and sank a few years back.

I worry about the impact on Dall’s porpoises and the marine ecosystem that supports them, should our government approve Enbridge’s current pipeline and tanker proposal, to export crude oil from the Alberta tar sands. The plan would mean that every week, 3 to 10 huge oil tankers would be travelling through these narrow and busy waterways. And here at home, I have just as much concern about the plan to increase crude oil shipments out of Burrard Inlet, which would mean a big increase in the already high number of oil tankers passing through the Straits of Georgia and Juan de Fuca.

Both plans sound to me like a recipe for disaster – and not just for the porpoises.