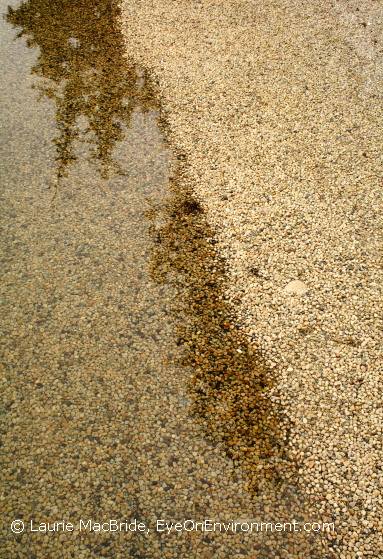 Perhaps it’s because I’ve lived on the coast all my life, or maybe I’m simply attracted by “edges”: my eye is inevitably drawn to the places where sea and land meet – the constantly moving interface of brine and terra firma.

The specifics change along with the weather and tides, so that on any given beach, the location of the edge varies from moment to moment – it’s never exactly the same. And if you watch closely enough, over time, you’ll see an immense variety of curves, angles, reflections, shadows and shapes along and beside that moving edge.

The photo above was made at Pruth Bay on Calvert Island, on a calm summer’s day at a fairly high tide. Standing on the pier over the beach, I was struck by the textures and subtle colours of the pebble shoreline, and with the water’s reflection of the forest’s edge. The moment seemed like a perfect blending of the water and the land: our planet Earth in miniature.

The photo below was made further south, at Drumbeg Park on Gabriola Island, on a winter day when a light breeze was blowing. 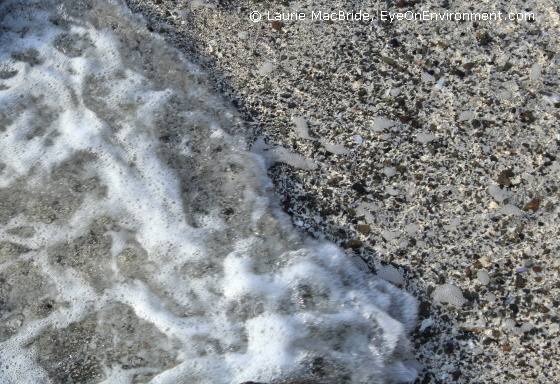 The sea was active that day and the tide was definitely high – in fact, we had just experienced a “king tide”, an exceptionally high tide that occurs only infrequently (although with increasing sea level rise, such heights will become more and more common).

Drumbeg beach, like many on the BC coast, is a shell midden, composed of broken clam, barnacle, geoduck, mussel and other mollusc shells – the waste products from human dinners over millennia. Shell middens along our coast can be many metres deep, indicating continuous occupation by aboriginal people for up to 10,000 years – perhaps as many as 12,000 in some places. In the sites that supported large villages, shell middens extend up from the water’s edge a considerable distance into the forest.

Because the shells are predominantly white, middens are highly visible; from a distance they often resemble a sandy tropical beach. But many of the smaller middens are harder to spot, because they’re underwater even at the lowest of tides – an indicator of the amount of sea level rise we’ve already experienced, since the end of the last ice age. When we’re kayaking close to shore, we see these middens below, as bright white patches on the sea floor: a vivid reminder that on this coast, what constitutes the “edge” is always changing.

To purchase or license photos