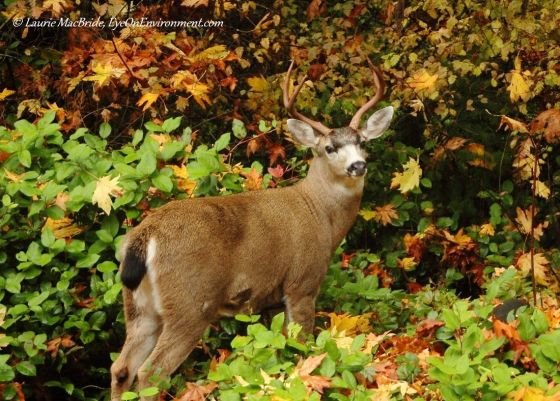 Pretty in Fall  – he wears the colours well.

Meet Pretty Boy, one of our “resident” family of black-tailed deer. He’s aptly named, isn’t he?

He and his twin brother first appeared outside our kitchen window in 2009. Since then we’ve watched him grow from a tiny fawn, to a gangly adolescent, to the powerful buck he’s become today.

Here’s a photo of the two of them at about a year old – their gangly adolescent stage, when their antler buds were just beginning to show.

Ready for Some Fun

They’ve changed a lot since then!

We haven’t seen his brother, Holey Coat, for quite some time – I’m hoping he’s still alive and healthy, but have no way of knowing.

By contrast, Pretty Boy still visits from time to time. He’s obviously grown into a fine young fellow: large, strong and handsome. I expect he’s been turning more than a few does’ heads this fall.

We’re happy to see him successfully launched into adulthood, even though it means he stops by much less often these days. And on those rare days that he does visit,  we can’t help feeling a bit like proud parents – even though we really had little to do with it.

You can click on the images to see them in larger view.