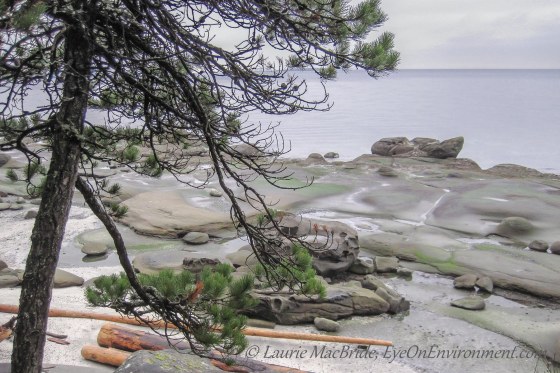 Our mostly grey west-coast winters tend to have little in the way of colour – so instead, we learn to appreciate the subtle textures and monochromatic hues that dominate this season.

The  sandstone shoreline in the photo above is typical of Gabriola Island. The soft rock has been eroded over the ages by salt water, wind and waves rolling in from the wide and often windy Strait of Georgia. As a result, long, shelving pans appear as the tide goes out – gently undulating sandstone that calls out to be walked upon. But beware: in winter these shores are slippery with algae, so they can be treacherous.

Much more treacherous, though, would be the huge increase in the number of massive crude oil tankers moving through the Strait if Kinder Morgan gets its pipeline expansion plan approved. It would make a major oil spill here an eventual certainty – with our shores, beaches and the intertidal life they support directly on the receiving end.

Most of us on the west coast take for granted the ability to enjoy beautiful, life-affirming shorelines, year-round. But clearly, we shouldn’t. The good news is that public awareness is growing, and many people are starting to add their voices to the growing campaign to say “no” to more tankers passing through our waters.

In the meantime, I’ll remind myself to notice and appreciate, more than ever, the beauty contained in the soft rock, subtle textures and gentle hues of our island’s shores – even on the greyest day that winter can bring.

If you’d like to learn more about the tanker issue here in our region or how you can help, here’s a link.