Rolling Out the Hot New Wheels

First ride in the new ELF  (click to enlarge)

Here on Gabriola Island these days, my father-in-law, Ted, is turning heads, attracting crowds and prompting smiles every time he goes out.

It’s not just because he’s well-liked on the island – though he definitely is. The buzz is because of his hot new wheels: an electric-assist ELF tricycle, which arrived on a foggy morning in early January.

This is not your ordinary pedal trike. Aside from its smooth, continuously variable transmission and its comfortable ride, it has the added bonus of an electric motor to help get up slopes, powered by a battery that’s recharged by the the ELF’s solar panel or by plugging in to household power. It also has brake lights, turn signals and other safety features, a locking trunk that can carry 150 or more pounds of cargo, plus a pod-like body to keep off the rain while you pedal or cruise along. Tiny, practical AND deluxe all in one!

Ted, who is 94, has been an active cyclist for a long time, pedaling a recumbent trike to get around ever since he retired his car and driver’s license some years ago. He’s still very fit and capable, but nowadays a bit of occasional electric assist is welcome – thus the upgrade to the ELF.

He’s pleased to see how well people are responding, and hopes the ELF will encourage others to consider climate-friendly transportation alternatives. He knows how urgently the planet needs a green revolution, so he’s happy to roll out his new electric wheels for the cause. Aside from that, he has to admit that the ELF is a whole lot of fun. 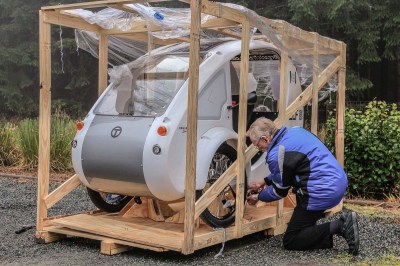 Adjusting one of the side mirrors