In Praise of the “Common” Seagull 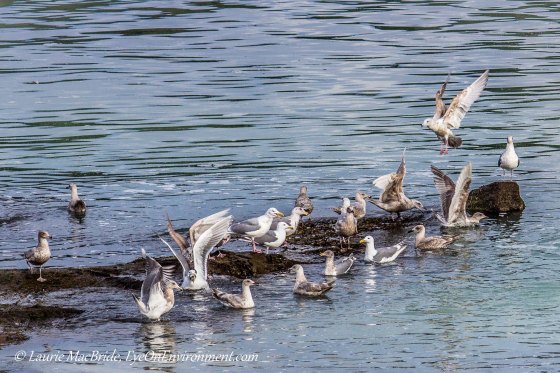 Spring Feast (click to enlarge, and then again to see all the details)

Here on Gabriola Island people are still talking about what a great herring season we had last month – those boisterous sea lions (featured in my previous post) made quite an impression, as did the eagles, who came in massive numbers to take in the bounty. It was a daily show of profusion and feasting.

But just as interesting, to me, were the seagulls – those much-maligned birds with their unforgettable calls and complex social interactions.

The photo above features a small subset of the hundreds of Glaucous-winged gulls I saw one afternoon at Drumbeg Park, bulking up on nutrient-rich herring that were driven against the shore by seals, sea lions and ducks.

The birds with bright white body feathers, grey wings and orange bills are adults, while the scruffy looking ones with black bills are juveniles. If you click on the image to enlarge it, you can see the diversity of behaviors and interactions and almost imagine the conversations going on among these very active, social birds. (You can click a second time to further enlarge the image and catch all the details.)

It was a joy to see so many gulls at Drumbeg, as it took me back to the days when seagull populations were strong here in the Strait of Georgia. I grew up close to a beach, and we spent all our summers aboard a boat, so gulls, with their mewing, whistling, rolling cries, were always present in my world. It was easy to take gulls for granted or even – as many people did – to denigrate them.

Our seagull population is now only half what it was in the 1980s (more info), so unfortunately, I’m hearing those wonderful sounds much less often nowadays. Like so many of our fellow species, seagulls are in trouble. It’s long past time we gave these fascinating birds the respect and appreciation they deserve.

Sea, land, nature & nautical on the BC coast
View all posts by Laurie MacBride, Eye on Environment »