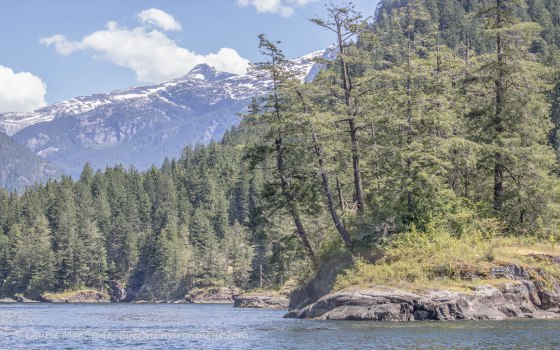 Entering Malibu: hoping our timing is right (click on photos to enlarge)

The crown jewel of our Marine Parks, Princess Louisa Inlet, is tucked far into BC’s Coast Mountain Range. To get there you have to run a gauntlet of challenges.

First, there’s the lengthy cruise (about five hours in our case) up the long reaches of Jervis Inlet, which I described in an earlier post. Snaking your way up this deep fjord system, you’re surrounded by massive peaks and glaciers. It was stunningly beautiful the day we did it, but I imagine it could be a tedious journey on a wet, windy or cloudy day.

Next, there’s the issue of timing: to get into Princess Louisa you have to transit Malibu Rapids, where the current can run 9 knots with dangerous overfalls. The only safe time is “slack tide”, the short window when the current stops flowing in one direction and starts moving the other way. Daylight slack tides occur at most twice a day (sometimes only once), and if you miss slack, you’ve got a problem – especially since there’s no safe anchorage sites in the deep fjord outside the Inlet.

Malibu’s currents aren’t listed in the Canadian Tide and Current Tables. So the best you can do is follow Canadian Hydrographic Service advice: refer to the tide table for Point Atkinson (about 100 km south), then add 35 minutes to the time of its low tide or 25 to its high, to estimate slack tide at Malibu.

At least one online site uses another (undefined) method, and comes up with very different times than the Point Atkinson calculations. This provokes ongoing debate among boaters at the dock in Egmont, who are trying to determine what time they need to set out on the 32 mile journey, to transit Malibu at slack and get anchored or docked in Princess Louisa before dark. We stuck with the CHS advice, and were glad we did, because…

Third, there’s Malibu itself: even at slack tide with little current, the passage can be stressful. For one thing, there’s a dogleg turn that makes it impossible to see what traffic might be coming in your direction. (It’s wise, before entering, to broadcast a message on the VHF radio to let any approaching boaters know you’re coming their way.) 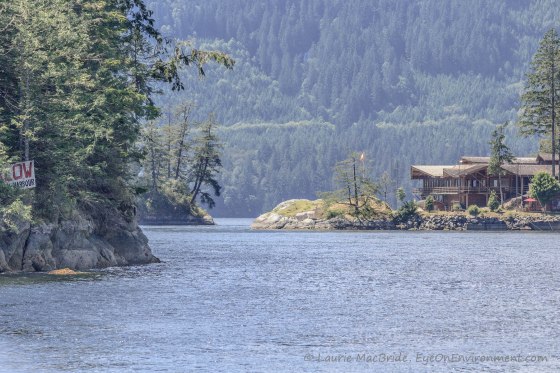 Looking back at the dogleg pass through Malibu. Whew – we made it!

And finally, if you’re self-conscious there’s an additional challenge: passing close by the large youth camp on shore, you just know that hundreds of eyes are watching the show and finding cause for hilarity!

A gauntlet, for sure, but one well worth running. Once through Malibu, we took a deep breath and turned our attention to the beauty that lay around and above us – which turned out to be spectacular. More about that in a future post. 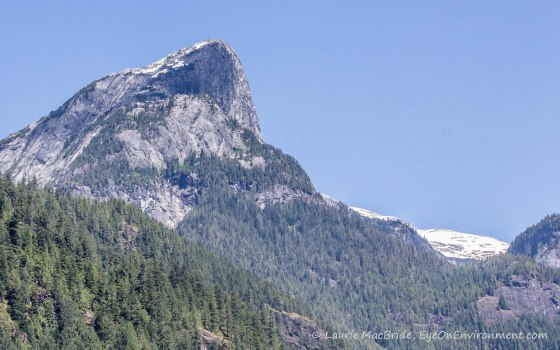 Beckoning us into Princess Louisa…