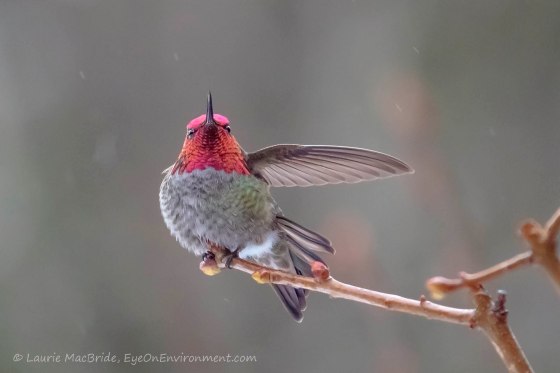 “Shove off, Winter!” says Hummy (click on photos to enlarge)

Little Hummy, our resident male Anna’s Hummingbird, wasn’t pleased with the last few rounds of snow we’ve had. Nor was I.

Winter has been a long, drawn-out affair here on the west coast this year, with repeat snowfalls ever since early December and lower temperatures than we’re used to. The amount of white stuff we’ve received may seem trivial to readers from other parts of the continent, but it’s been a test of west coasters’ resilience. I’ve lived here all my life and can’t recall a winter that felt so protracted. I’m not alone: every week I hear others saying, “Enough already! No more snow!”

I expect Hummy concurs. Unlike most hummingbirds, Anna’s don’t migrate with the seasons. Here on BC’s south coast, where winter is usually a mild affair, they’re now year-round residents, having slowly extended their range north from California over the past few decades. Ever since they showed up at our place for the first time about five years ago we’ve kept the feeders topped up all winter. In return the hummers have delighted us with their colourful presence and cheerful chatter throughout the darkest part of the year.

But right now, Hummy must be wondering why his family ever moved up here.  Like me, he’s done with winter, but as the meterologists keep telling us, winter’s not done with us yet. To which Hummy and I have only one thing to say: “Harrumph!”

Sea, land, nature & nautical on the BC coast
View all posts by Laurie MacBride, Eye on Environment »