It’s Been Ruff Out There 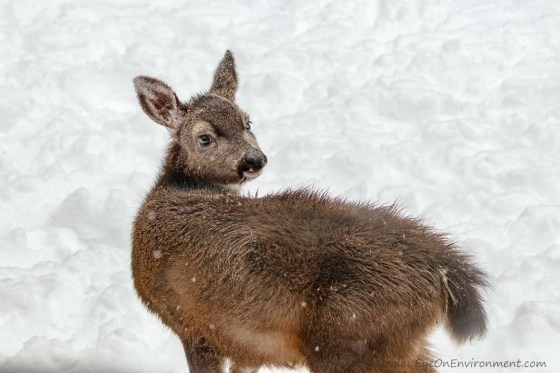 Ruff, looking rather rough (click on any of the images to enlarge)

Most mornings our six-member deer family gathers on the lawn outside our kitchen window for an hour or so, browsing, ruminating, grooming and relaxing in our dog-free zone (one of very few in our neighbourhood).

But for several days this week, something was decidedly wrong. Reddy the fawn was there with his mom, Scarlet, but his twin brother Ruff was missing.

Winter is tough on fawns and only about half survive their first year. All of Scarlet’s three fawns from 2015, ’16 and ’18 died before their first birthday. Her only offspring to survive thus far have been twins LB and LG, now two and a half. We’ve been keeping our fingers crossed that Ruff and Reddy, born last summer, will survive. Ruff’s absence was therefore worrisome, especially with a heavy snowfall, low temperatures and strong winds in the forecast.

For the next two days the family arrived on schedule each morning, but still no Ruff. So when he finally appeared outside our window on the third afternoon, we were relieved – though no less worried.  It had snowed heavily by then and it must have been bewildering for the poor little tyke, all alone in a landscape that was no longer recognizable. 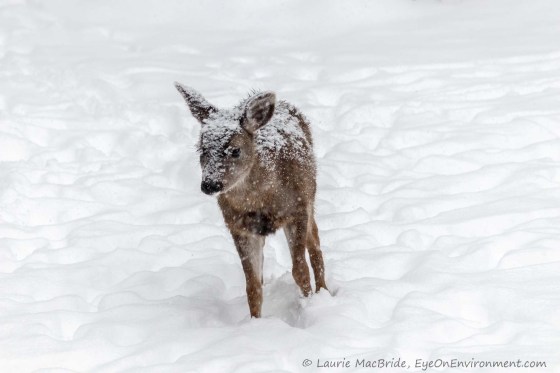 He looked cold and confused, and was shaking all over, likely with the cold. All we could offer was a bowl of barley, apples and sympathy, which seemed appreciated. He hung out for a long time, watching us through the window as if seeking reassurance. His family didn’t appear – perhaps they were huddled under a cedar tree, keeping each other warm. I wished I could lead Ruff into the shelter of our woodshed, but of course that was impossible. 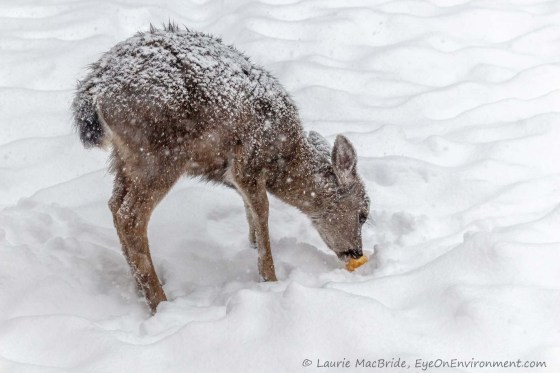 For another two days, the pattern was repeated. The rest of the family came in the morning, while Ruff arrived in the afternoon, still alone. It seemed he might perish before they could find each other. The weather was worsening and while he seemed to gain some strength from our food and company, we could see what he really needed was his own family. Without his daily grooming from Scarlet and Reddy, Ruff’s fur was unkempt – not a good sign in a fawn, especially with more snow and 40-knot winds in the forecast.

So you can imagine how happy we were yesterday afternoon when we looked out the window and spotted Ruff, looking freshly groomed, healthy and – best of all – accompanied by his mom, brother and big sister. Finally, the family was back together! It was cause for relief and celebration – and an apple for everyone. 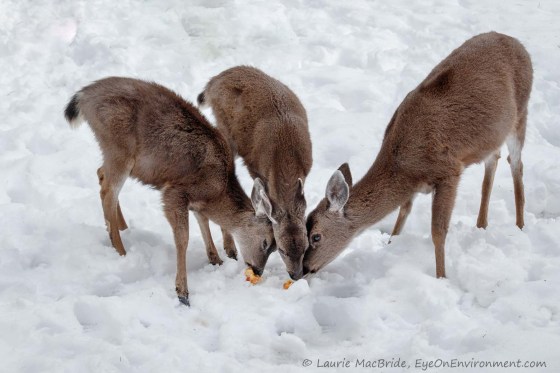 Ruff between Reddy and Scarlet – a sweet reunion.