Beauty on a Dark Day 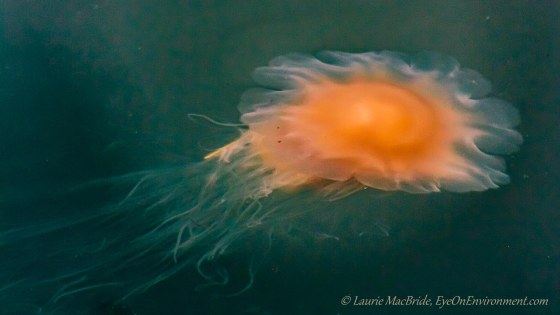 Cruising on the remote, outer Central Coast of BC, we had anchored in a cove on Stryker Island. It was an utterly gray day with an almost steady rain, so I declined the invitation to go paddling. Taking some “alone time” in the relatively dry confines of our boat seemed the better option.

When the rain finally stopped for a few minutes, I ventured out to the foredeck with my camera, in case anything interesting could be found among the copious bits of seaweed, wood and other debris that were floating by in the current. To my delight, a large orange jellyfish (above) was undulating towards the boat.

Despite the technical deficiencies of this photo, I like it, for two reasons. First, it was taken in the wild, with only the available light of a dreary afternoon. By contrast, most jellyfish photos that you can find online seem to have been taken in aquariums, with good light and shooting conditions.

The second reason is that I’ve tried unsuccessfully over the years to photograph jellyfish from kayaks and dinghies. It never works for me. Either the jellyfish floats away right at the crucial moment, or the current pushes my vessel off course when I let go of the paddle to pick up my camera, or I paddle hard to get properly situated, creating too much turbulence for a clear shot. But on that dreary day at Stryker Island, I was finally able to manage a reasonably clear jellyfish shot. No wonder I like the photo!

The Lion’s Mane medusa, AKA Sea blubber or Sea nettle (Cyanea capillata), is the world’s largest jellyfish. It’s commonly found along the northwest Pacific coast in the warmer months of spring, summer and fall. In our area they’re usually about 50 cm (20 inches) in diameter, with trailing, 2 metre long tentacles – but in high latitudes they can grow to a staggering 6.6 ft (2 m) across, with 9 metre long tentacles!

Juvenile haddock and other small fish swim among the tentacles to take shelter from predators, but for the rest of us, a safe distance is advised. These jellyfish pack a painful sting, so you won’t want to go swimming when they’re around, or touch one that has washed up on the beach. Look and admire these oddly beautiful, pulsating orange creatures – but best not to touch.