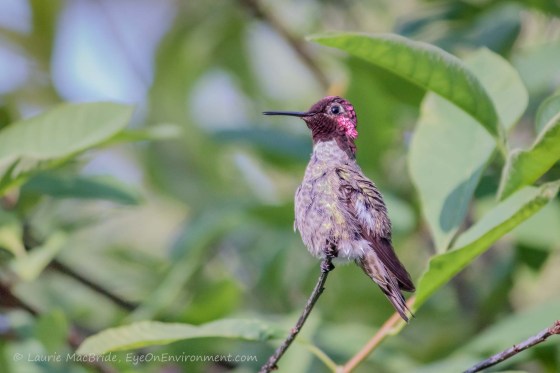 Anna’s hummingbirds are year round residents at our home on Gabriola Island, providing us with daily entertainment.

For months now, “Hummy”, an ever-feisty male, has been making good use of his favorite perch on a tiny branch of the Indian plum tree. He starts his watch around sunrise each day, keeping up a steady barrage of raspy chatter that seems to go on until dark. (Alas, hummers are not exactly the most melodic of singers in the bird world.)

His perch is high enough to give him a good view of the airspace around our garden and deck, where he can keep watch on the antics of his extended family. It’s also close enough to “his” feeder to enable him to zoom over and scare away any interlopers that dare to attempt a raid – including his own mate and offspring.

Earlier this summer he had to keep up a relentless pace, but now that the Rufous hummingbirds have gone south, the airspace is a lot less crowded. He can take life a bit easier these days, needing only to keep other Anna’s in line.

“Even so”, he says, “one must remain vigilant!”